My 40th High School Reunion at McGill-Toolen High School in Mobile, Alabama is coming up this year. Isn’t that crazy? Didn’t the streaker jump out in front of Bishop May at graduation just yesterday? Or was that at the previous year’s graduating class? Oh well, as an old girlfriend used to say, “see one wiener, seen’em all…”

As much as I’d love to make it to the reunion, and there are some people there I’d dearly love to see, I’m going to take a pass. I just started this radio station here on this desert island so I’m going to be a responsible adult so people can listen to it and spend my time trying to help the businesses here so I can pay back everyone for my blessed life.

It’s truly been that.

Let me try to put that into perspective.

As much as I tried to plan my life, so much has been a lucky accident. For instance…

My high school class graduated in 1976. That was the bicentennial year celebration of the United States. “The Spirit of 76” was the motto.

At the beginning of the school year, in the fall of 1975, I signed up for an audio/video arts class taught by my previous year’s American Studies teacher, Mrs. Everest.

Taking that class was a lucky accident as it was very fundamental in the direction I took in life, though I hadn’t really thought much about it until now. We had a professional grade video camera. We had super8 film cameras. We worked on storyboards for movies.
We wrote scripts and story treatments. We recorded audio on tape recorders and cassette players. Even more so than college, that class prepared me for my life.

The accident actually had it’s roots in the year before. We wrote and filmed a movie in Mrs. Everest’s history class. My friend Carl Salter wrote it and I directed it. (That’s because a) Carl was very funny and perhaps the smartest guy in my school and b) my Dad had movie cameras…)

We’d finished the filming. I’d cut the movie down to it’s finished size. And back in those days, film was actually that. It was film. It wasn’t digital. It didn’t track sound. That required recording in real time and matching it up, or recording it afterwards and lip-synching.

I’m a passionate person about my work and have been all my life, even in high school. And I was a perfectionist. And that’s not a great combination.

We’d done the impossible. We’d gotten all of the actors together on a Saturday afternoon which was just as impossible then as it is now. We thought it would take an hour and after about an hour, it was obvious we weren’t going to be able to do it. Making things worse, the splices in the film broke. So I had a meltdown when I tragically realized we couldn’t put an audio track down with it.
After my meltdown in front of 20 classmates, they probably realized I was crazy. So they all checked out and went for pizza. Carl sympathized and tried to console me. But it wasn’t much help. I just wanted the movie to be fantastic and at that time in my life, I felt that the way to get something to fit was to pound it with a hammer. My dad was a Senior Master Sergeant in the US Air Force.

Part of my response was an occupational hazard of having a man who was relentless at starting and finishing things. Such was my father. There was NO quit in my dad.

Mrs. Everest put things into perspective. “There will be other movies she said.” And with that, I was calm.

It was really that easy.

The lucky accident, Mrs. Everest was allowed to create an Audio Visual Arts Class for the next year. I like to think that our film resulted in a new class that took place.

Like so many kids in high school, I used to live inside my head. I was trapped there. It was a playground of imagination about the things I wanted to do and I was paralyzed about how to begin. I wanted to do something important.

Mrs. Everest’s class kind of got the ball rolling on how to do things. If you proposed a project, you had to present it in some form. So we had plenty of time to work on the projects during her class. It was at the end of the day so we’d usually arrive in some kind of veg’d out state. No, not what you think. It was more likely from a deep-fried bean burrito than a deep fried spleef, though I’m sure that happened too.

There were so many great things about those high school years 1972- 1976. One important one to me is that we were sound-tracked by great music. And while we worked on our projects, Mrs. Everest let us listen to the music.

More lucky accidents in my life happened in that afternoon class. Here are two important ones.

The first time I ever heard Bob Dylan’s “Blood on the Tracks” album was in Mrs. Everest’s Audio Video class.

I believe it w 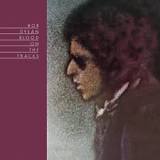 as Boo Chavers who brought it to class. Boo was a pretty girl of whom I had a pre-conceived opinion because she was one of the popular girls. This was a class for geeks like me. I was such a snob. I couldn’t understand why she was in that class. I changed my mind about her when she put that album on.

“Tangled Up in Blue” was a song that I’d never heard before. It tells a story without reference to time. Each verse in the song could be at any moment, past present or future. “Simple Twist of Fate” was also time-twisted tale, though with a more cohesive storyline… It’s a story about a chance encounter. But is that encounter in the present or the past? Who writes like this?

Both songs told stories that bounced around like a pinball.

While I was trying to figure out the story lines, Boo was quick to point out the pain and sadness in those songs.

A popular girl who understands pain? Up to that point in my life, I thought only lonely cowboy types understood loneliness and pain. Was I wrong?

As I look back on the 40 years past, those two songs are perfect songs, from what may be Bob Dylan’s perfect album.

We all feel pain. We each react to it differently. Hell, we even react differently at different times. We ignore it, stand on it, shake our fist at it, are swallowed whole by it, riff on it, are knocked down by it, triumph over it, are whittled down by it, and perhaps more than any other emotion, seek to avoid it at all costs. We fail to understand it, and wonder why life is not free from it.

And there are no answers.

When we can slow down for a moment, our minds jump around in time and like those songs we find an image here, an event there, a regret here, a triumph there.

We get so busy and the ribbon of our life gets so long that taking time to examine the full ribbon stretched out across the length of the room takes work.

When we do look at that ribbon, we find surprises.

We discover the kind of surprises that can only be found by spending an afternoon thinking about a class on the second floor of a high school, in a room filled with plants fueled by Mrs. Everest’s leftover coffee, where she let us think and solve problems that couldn’t be standardized-tested but that would have an impact on us over our entire lives.