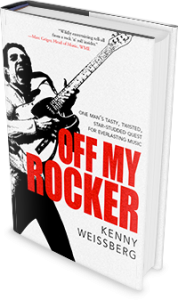 Over my years, I’ve had some amazing experiences. Radio in that sense has been very good to me. What I didn’t get paid in money, I earned in priceless personal experiences.

I was looking at whom I’ve interviewed recently in a moment of introspection. My favorite interview of all time was Joe Walsh. He was, more than any other musician, the star I was most awed by. He didn’t seem to take himself seriously even as he played some of the most memorable rock songs of all-time. He made fun of the trappings of rock and roll. And he realized early on that life needs to be fun. Only later did I realize he was masking a lot of hurt. As I got the chance to know him and hang out with him a few times, I came to find him as real as they come. He’s smart, funny, witty, and for me like a brother.

In the “History of the Eagles” documentary,  http://www.imdb.com/title/tt2194326/ , Joe said something that I’ll paraphrase.

In the course of this chaos, I met a man who was on a similar path to mine. Kenny Weissberg and I were both working all the time and while we never were best buddies, we always enjoyed fun conversations and I always looked forward to the times that Kenny would come to the studios at KPRi, where I was the morning show host for 18 years in San Diego. Kenny’s prime job was booking San Diego’s premiere venue, Humphrey’s Concerts by the Bay and at KPRi, Kenny hosted a show that was very special. He called it “Music Without Boundaries.”

In the strictly regimented world of commercial radio, Kenny had the freedom to choose music as obscure as African Throat Singing and as benign as Dusty Springfield.

Two years ago Kenny published a book about his life called “Off My Rocker.” http://kennyweissberg.com/  He gave me a copy. Around that time, my life was in a state of flux. My instincts were telling me that my radio career was about to come to a close in San Di 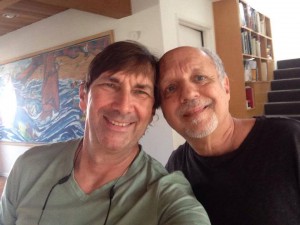 ego and I was facing some personal changes that would eventually see me here in Roatan. As much as I wanted to read it then, and even though it became a best-seller, I never found the time.

This past weekend, I needed a mental break from everything. I miss my kids, I needed time for some self-reflection, and have been so focused on the radio station that I’ve found myself lost.

So my reset button was to pick up Kenny’s book. Reading “Off My Rocker” made me feel at home. It gave me a chance to reflect on my 40 years in radio, the fleeting ego bump that comes from being in a town of millions where everyone knows your name, and then blowing that up and starting completely from scratch on an island where almost no one trusts you as the “outsider” and the isolation that comes with starting a business that has been a slow march uphill, and the friends I’ve made over my life, both in the US and here on Roatan. Your friends and family, in the end, are all that matters. The rest is scenery. I realize that in all the chaos, things happen much like a garden path gets laid in a forest. One rock here, one rock there until you can look back and see that under the moonlight the path makes perfect sense. Rock and Roll.