The dork on the right…

I was at the Boho Beach Club at Foster’s Resort yesterday, floating on the water and I watched a guy run into the surf.

I thought about the times that I had tried to do that and that despite my best efforts, I always looked like a nimrod because despite being dressed in my best vacation board shorts, regardless of having a good run from the beach, none of that ever seems good enough to make the end result turn out like a Hollywood movie shot.

For me at least, I always end up splashing in and getting off balance and kerplunk… instead of swoosh… (There is a big difference between kerplunk and swoosh.)

So I decided to google search a picture of a “man runs into surf”… and the only pictures that looked good out of the bunch were professionally shot by Getty Images, Shutterstock, and other content suppliers who resell images to magazines, websites, movies, etc. All had that great shot of the trim athletic man flying gracefully into the surf at the beach.

There is a reason that I look like more like Jim Carrey than Matthew McConaughey when I try to run into the water and that’s because those shots are probably the result of hours of work, on the right beach in optimum conditions.

I guess the lesson is when you take something on as a project be it art, business, cooking something new, putting on your first party, or just a first date… Don’t expect it to be like that graceful run into the rising blue waves. It takes a lot of attempts to get the picture on the left… You are far more likely to look like me… or the dork on the right… 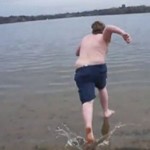 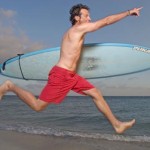