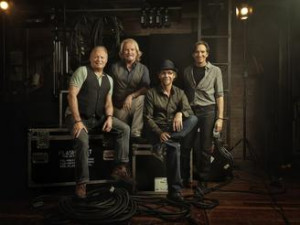 Here on Roatan, I’ve been sneaking around checking out the performing artists… There are some great players here… Brion James, Scott Haynes, Patty McCulla and Marcos, Carleen, Scotty C., Kristofer, and there are more that I haven’t seen, just to name a few who play here regularly… SO why a picture of a band that is playing tonight in SAN DIEGO, CALIFORNIA?

Musicians spend so many hours playing and refining their crafts that when you breakdown what they actually make per hour, it’s laughable and unfortunately, so many business people control them with a “play for exposure, tips, or if you don’t like it then I can always find someone else… mentality.”

That’s why one of the things I always tried to do was create concert “series” … so that listeners would have a regular place to see LIVE music being performed and so MUSICIANS could get a paycheck.

This is hard do to because it can be very expensive to put on a show and just break even.

Couple that with the “Music SHOULD BE FREE” mentality that seems to be going around the United States today among so many younger people who aren’t taught about music, music appreciation, or both, and I’m surprised any music is being made at all.

So one of the things that I was able to do in SAN DIEGO… was develop what is now the GREEN FLASH CONCERT SERIES… at the Birch Aquarium at Scripps. Art and Science really DO go together… It worked and is one of the best series shows for live music in San Diego if you will indulge me in being proud for a moment.

Well you always want to keep creating if you are a creative person.

For many years, I felt that I’d like to see a series of shows in Balboa Park in one of my favorite museums. That just happens to be the Reuben H. Fleet Science Center. It’s next to the fountain and has a big open room area between the exhibit area and the IMAX THEATER, that when set up for a concert is just lovely.

After years of my persistent trying, last year they had a big exhibit called GUITAR and the timing was right, and we launched it and for a first year series, WE did well..

We knew for year two, that we needed to really ramp it up.

We set up the shows for FRIDAY NIGHTS… once per month, priced the tickets so we could afford bands who always deliver and produce our shows well technically and artistically, brought in really yummy food and beverage providers that would allow us to feed our guests and give them full service libation so that after a long day at the office or even worse, battling traffic, they’d get a really good value for their night out.

Parking is free so there is no problem to find a place to park. And all in all, you don’t have to fight to go downtown with all the extra expenses associated with a CITY location…

And what can you find wrong with Balboa Park? The answer is NOTHING.

Balboa Park is a beautiful and romantic place to go for a walk before or after a show. It’s a great place to walk holding hands, stealing a kiss or just admiring the beauty of the architecture.

And The Reuben H. Fleet Science Center jumped on board and Craig Blower, the CEO, supported me.

That’s the good news… And for this series to continue, these shows need to be attended and break even… because it’s always the first years of an artistic venture that are the most trying. People don’t know about it, or where it is, or what it’s going to be like, or they have a pre-conceived idea that turns out to be nothing like the end result.

It takes attendance though… Your attendance, to support a concert series and keep it going.

Most of us look down skeptically at HYPE… as we should.

Yet if you have NEVER seen VENICE performing live, you are missing a rare treat. They do things live vocally that ONLY a few bands can pull off live.

Most bands have one LEAD SINGER who dominates the show and becomes the center of attention.

VENICE has four… any one of them can sing well enough to be a frontman for most groups… Marvel at their uncanny ability to blend their voices together and you will find them a musical jewel.

My request to you is that where ever you live,  support REAL musicians… not just the stuff that is being manufactured for mass consumption… It’s a way to give back and I know how hard it can be for you to decide how to allocate your resources.

Just remember, what shows our soul most, is the music, art, and science that comes from inside of us.

I personally want to thank all of the men and women who have bought tickets already, and the volunteers who help put these series together for their great service to the community. And also the Reuben H. Fleet for giving this a chance.  They are an organization that supports ARTISTS… Instead of talking about it, they actually did it…

Here is VENICE putting their spin on the EAGLES “Desperado”

I’ll be there tonight in spirit… It’s a long flight from this little island in the Caribbean to Balboa Park … and YOU can be there for me. Let me know that what I wrote here turned out to be true, and send me some pictures…