50 Shades of Hemingway on a Dark Grey Balmy Night

“It was a dark and balmy night…” 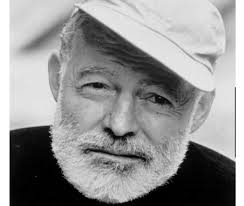 I was going to make the statement that “No major novel” will ever start with that line. But if it did, it would have been written by Ernest Hemingway… and then I started thinking, what would Hemingway have thought about Fifty Shades of Grey?

Would he have predicted Fifty Shades of Grey?

Someone once said that if you have an infinite amount of time and an infinite number of monkeys on keyboards, eventually one of them will accidentally write Hamlet.

We are now approaching 7 billion cell phone subscriptions world wide… Where is the story?

So I was trying to think of clever titles for a book… Because if the title isn’t there, no one picks it off the shelf… or downloads it to their Kindle… Everything starts with the title… (“50 Shades of Anachromatic Color” wouldn’t have been a best seller…)

“Not All Radio People are Annoying… Some are Dead”- (my biograpy…)

I bring up the last title because I’m halfway through with Moby Dick.

I’m of the belief that Ernest Hemingway would have written Moby Dick in 12 pages.

But the title just gets you to open the book… It’s the first line that makes you take it home.

For instance… The perfect Hemingway line…

“In the late summer of that year we lived in a house in a village that looked across the river and the plain to the mountains.”
– A Farewell to Arms by Ernest Hemingway

“In the early winter of that year we listened to the rain pound a 21 day beat on the roof of the brown house between the rust-stained white church and the white-stained rust coral of Mangrove Bight.”
– “Untitled” by Yers Truly

“It was a dark and stormy night…”
– Snoopy

But Lord, it would be so much more fun if that was accidentally written by a monkey on an iPhone. 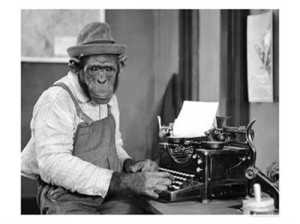