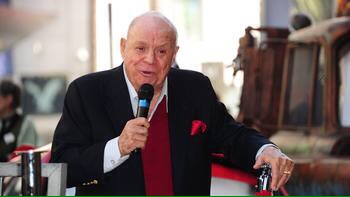 Many years ago on KPRI radio, I had the chance to interview Don Rickles.
Not knowing what to expect I did my research and found it Don was a naturally funny guy. He was just drawn to acting like he was irritated by everything in life and everyone.

When I got him on the phone we had a long conversation about his sense of humor and how he would pick on people in the audience. I asked him if he did it at random.

He said “Madison, I look at the crowd and talk to people before I ever go on stage so I can find the people who are going to be open to me making fun of them. I never want to give anybody a bad time. I want to make everybody laugh. That’s what I do. I can tell from talking to you that you would be easy to pick on and make fun of. And that you would enjoy it.”
Then Don told me the classic story about him and Frank Sinatra When Don was still young comic, he had been working with Frank.

Frank had arrived for dinner at a restaurant where Don had taken a date… Don’s date didn’t believe that Rickles knew Sinatra. Don excused himself when Sinatra briefly left his guests and without his date knowing told Frank that he’d brought areally cute date and that she’d be impressed if Frank dropped by Don’s table while they were having dinner.

A little later, Frank walked up to Don’s table… with a big smile Frank said, “Don, how the hell are you?”

Rickles gave Sinatra an irritated look and responded, “Not now Frank, can’t you see I’m with someone ?”

For me, the telling thing about Rickles, was the phone call I received after we hung up.

Don called me back. “Madison, how long will it take me to get from LA to Viejas Casino? Is it a nice place? Do they have a nice theater, and will I have a good audience?”

I answered his questions and assured him he would have a good time.

“Thanks Madison… it was really nice talking with you.”
Don, the pleasure was all mine…