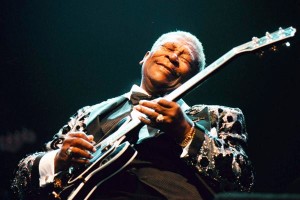 I haven’t posted anything in some time… It’s been busy here on Roatan. Sadly, today, I’m posting a eulogy for BB King. Over the years that I was in radio, I had the chance to see BB King perform several times… In the 1980s, I saw BB play at a national guard armory in Mississippi. There were only a handful of white people there. I was among them. Tickets were only five dollars. I say this because many years later, when I had the opportunity to interview BB King, he made an observation.

He said that he was honored to have been part of the catalyst for the British Invasion in the 1960s. Bands like The Rolling Stones, The Yardbirds, Eric Clapton, The Animals, and John Mayall’s Bluesbreakers, were young kids who grew up listening to US Blues music. Long before the white kids in the USA gravitated towards the blues, these teenagers in Britain understood the nature of blues…

Blues is, at it’s essence, three chords and the truth. It can be sad or happy and deeply sexual… therefore dangerous because it’s honest. Most pop of the late 50s and early 60s was watered down. But the blues was raw.

BB said that only those kids paid attention. He also said they got credit for what a lot of musicians created with their soul.

Later he said, he was finally discovered because of a song called “The Thrill is Gone.” And that brought him to the mainstream for a while. But once that song had served it’s purpose, he got lost again for a while. And then in the mid to late 1990s, he was discovered again. He thought that was in part because of a resurgence of the blues by bands like The Fabulous Thunderbirds and guitarists like Stevie Ray Vaughan. And from that time on, he was in demand. And he stayed in demand mainly because he was a “fair” entertainer with a “great band”. (His words.)

He was stoic about it. He was in his 70’s and had nothing to prove to anyone. His body of work did all the talking.
I almost ruined that interview though. We’d been talking about an album of standards that he’d released. The album was called “Reflections”. It was his 40th album.

I wanted to have a nice way to wrap up the interview. I’d prepared a line that required I set up the end. That was almost my undoing. So I asked him “How many children and grand-children do you have?”

He went dead cold on the interview, one of those moments where the quiet is so still that you feel it.
“What does that have anything to do with this album? Why would you ask that question? It has no business here.”
I was scrambling. But I kept my cool. “Mr. King… I mean no disrespect. I’m just setting up the end of this interview and I’m sure, if you permit me, you will see that I’m not trying to embarass you.”

My response “Well it’s good that a man who sings a song called “Makin’ Love is Good For Ya” practices what he preaches…”
And he howled with laughter… and the world was good…
I’ll never forget that laugh… It was real.